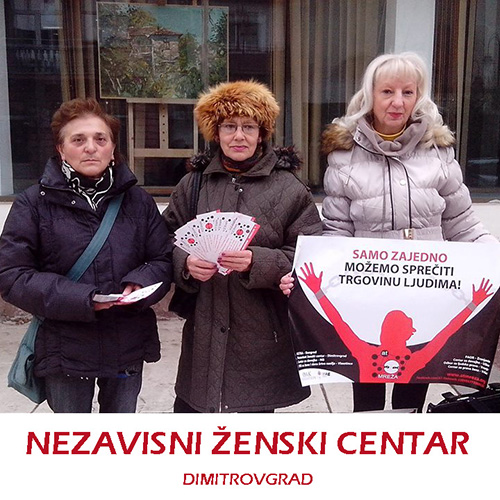 The organization informally exists since 2000, but it was registered under the name of the Center for Cultural Affirmation in 2004. In June 2011, it was reregistered in the Business Registers Agency and changed its name to the Independent Women's Center.

The mission and purpose of the organization are affirmation of women's rights, enhancement of the quality of life for women and children, fight against all forms of discrimination, sexual and gender-based violence, fight for peace and against wars and killings, development of civil society, promotion of creativity, innovation and education of women and children.

The objectives of the Independent Women's Center are the following:

The Independent Women's Center is one of the founders of ASTRA Network, whose mission is fighting against all forms of human trafficking. On the national level, we cooperate with Women in Black Network, Network of Women Fighting against Violence against Women, National Anti-Trafficking Team and Regional Centre for Minorities from Belgrade, and we are associated with other organizations of civil society in Serbia. On the local level, we maintain long-term close cooperation with the representatives of the police in Dimitrovgrad and Pirot, border police, comprehensive school, elementary school, Caribrod RTV and the Municipality of Dimitrovgrad.

The activities of the organizaton so far are the following:

The work of the Independent Women's Center is financially supported by the Municipality of Dimitrovgrad and the National Council of Bulgarian Minority in Serbia.
Caribrod RTV continually supports and reports on each organization activity.