The Center for Girls was founded on April 15, 1998, on the initiative of two volunteers of "SOS Helpline for Women and Children Victims of Violence". The AIM of its foundation was to improve the social position of young women through their education and emancipation.

The Center for Girls' MISSION is GIRL EMPOWERMENT through education, activism and creativity.

The Center for Girls' VISION is for empowered, confident, strong, safe girls, active in opposing patriarchy and making decisions about their lives with the opportunities for a better position in society.

In the last 17 years, numerous projects have been carried out in the Center for Girls, including SOS helpline, meeting place, workshops, lectures, psychological assistance, feminist-activist theater, festival. Three main preoccupations are prevention of violence against girls, prevention of human/girl trafficking and women's health. The target group are girls aged 15 to 30. The Center for Girls is a part of three networks:

Network of Women Against Violence; Women in Black Network and AT Network Serbia.

Since 2002, we have focused our attention to the education of girls in high schools. So far, we have held  1,515 workshops involving 21,220 girls in 13 high schools in Niš and its surroundings. The workshops covered various subjects arising from girls' needs. We have continued to organise workshops until today.
Starting from 2011, the Center for Girls' activism has been expressed through theater performances as well.

The activists of the Center for Girls have put on a reading perfomance of "The Vagina Monologues" and a play entitled "The Good Body" by Eve Ensler, as well as a play entitled  “The Waiting Room", adapted from the text “Italian Comedy: The Importance of Being a Mother" by Jasmina Tešanović.

In the period from 2010 to 2014, we organized FemiNiš, the festival of women's activism and art, four times, in collaboration with Women Space. With FemiNiš, we wanted to direct the attention of our fellow citizens as well as of the wider community not only to the position of women in our society, but also to the rich feminist theory and brave female activism in this territory, which persist for a long time. We feel that it is important to make people living in southern Serbia familiar with the idea of feminism and to convey up-to-date ideas from the feminist scene, as well as the observations concerning gender theory and women's position. Within FemiNiš festival, we have organized exhibitions, workshops, concerts, film screenings, panel discussions, theater plays, book promotions, and spent a lot of time socializing with the guests of the festival from the country and the region. 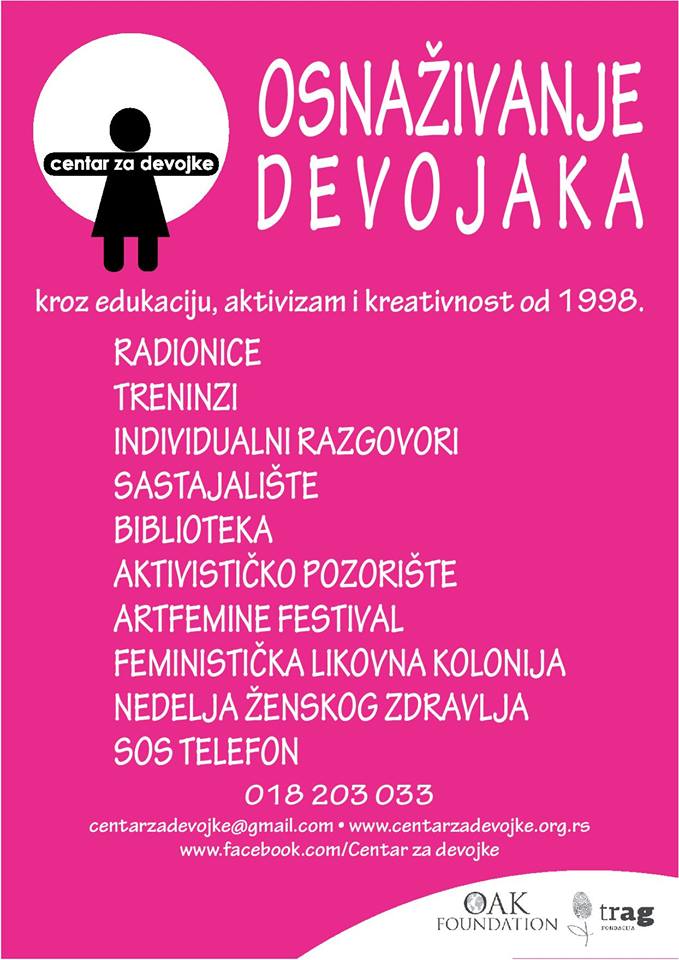 In 2014, we started  ArtFemine  – a festival of feminist activism and art. So far we have organized ArtFemine twice. ArtFemine festival opens up feminist space for networking, empowering, taking action, and associating with other activists, theorists, artists, citizens and guests from the country and the region. Within ArtFemine, special attention will be given to networking and empowering feminist youth in the country and the region. The festival is very important to us because female art, activism and creation are underrepresented in Niš.

In the last week of May, the activists of the Center for Girls organize the Week of Women's Helath, and have done so three times in a row. Since May 28 is celebrated as the International Day of Action for Women's Health and Reproductive Rights, we want to remind all women during this week that their health and health care are extremely important, considering the fact that women, unfortunately, do not take enough care of their health or when they start to, it might be too late.

After we had completed the training for working on SOS helpline in December 2013, and January and February 2014, SOS helpline for girls started to operate on February 25. SOS helpline is intended for girls we want to hear from and empower, and to inform about their rights, violence against girls and women, and human/girl trafficking. SOS helpline is open from 17:00 to 20:00, Tuesday to Saturday .